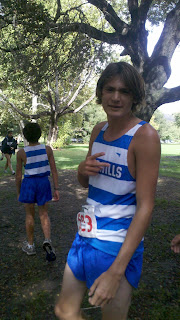 Today has been quite the day! I got up at 4am to run, but with the rain we cancelled at the last minute. My plan was to get a ton of work done on my computer since I was up, and head out for a few hours once the sun came up. Around 9am my son texted me from school, and informed me that his cross country meet after school was cancelled due to the rain. I was bummed at this was a local meet at Irvine Regional park(I love the trails throughout that park), and was pretty pumped for it. I then decided to text my son and ask him if he wanted to play hookie, and go run in the Saddleback mountains for a few hours and play in the rain & mud!? He was super excited and texted "hell ya!" Awsome sauce was my reply, and we had a date! I have been spending a ton of time with my son this last week just really trying to work through a few speed bumps we have hit, and I love that he enjoys trail running in the mountains almost as much as I do!

I planned on picking him up at noon(the original time his cross country team was to leave for the meet), but when I arrived at Dana the buses were their and ready to go! Tyler came running over to my car, and explained that the meet was not cancelled! I was so excited as I love going to his meets, and I get to run all the warm up & cool down runs with the team so its just awsome!!

He hopped on the bus, and I headed up to the park. When I arrived I quickly parked, grabbed my handheld, and knew I had exactly one hour to get a run in before he was competing. In my world I seize every opportunity I can to run, and here I was surrounded by awsome trails! I took off like a bandit, and spined my way up and out of the park to the trails. It was raining pretty hard at this point, and I loved it! Within 5 minutes my hair was soaked. I slopped through the mud on the trails, and laughed as my foot slid from under me, and down on my butt I went! I quickly jumped up, and was dying thinking about how awful I was gonna look once I return to the meet.

As soon as I got back my son looked at me and said, "mom this is a super fast course I am gonna rip it"! I smiled & winked at him. I always have said to him since he was a baby the word "godspeed". To us it means get to where you want to be as fast as god can take you~I then said "godspeed", and he smiled huge! Just then his coach came over to me and was just staring at me. He started to chuckle as he scoped my mud. His coach is a super cool guy, and actually one of Tyler's teachers, and we have fun teasing all the time. He always swares he is gonna go running with me sometime, but we all know he could never keep up!! haha...

The gun went off, and tyler took off like a bandit. Trabuco high school is wicked fast, and they had the first three spots. Next was Tyler's amazing teammate Gavin, and then Ty. Once they passed at mile 1.5 they split up to no mans land, and onto the trails. What's great is no of the other parents even attempted to scale up the hillside to the trails to see the action, but of course I did! A few of the Varsity guys followed me, and we laughed as we charged up the steep trail. Once at the top I could see Tyler still holding his place. With only a mile left when he passed me I told him to turn it the @#$$%^&**^&% on!!! "No mercy", I yelled!

I charged over to the finish line back across the park, and was stoked to see Tyler in the top 10 overall! I believe he was 8th out of a hundred or so boys! Not his best 5k time by any means, but he solidly broke 18mins, and still took 3rd for Dana?? Not exact on that one though. His IT band has been bugging him a bit, and he said he felt it today big time.

I smiled, and reminded him most kids are sitting at home playing video games, and we are out  here playing in the rain. His coach and I then took the boys out for a 30 minute cool down. it was fun except coach and I were so busy talking we totally forgot about the boys! About 10 minutes into it we look back, and had totally left all of them. My son yelled, "hey mom it's a cool down not a race"! So funny! We waited, and all stayed together after that. What a blast it was!! The other mom's look at me like I am crazy, but I am so thats fine by me! Crazy in a good way!

My son is an amazing kid. On the drive home he never stopped talking. I love that about us. We always have something to talk about, and that is very rare in most parent/child situations. Heck thats rare in most marriages! It's great to have someone to be able to just talk, and talk with, and I definitely try not to take that for granted. I am blessed to have my AMAZING son Tyler~blessed!

Off to go out to eat, and go see Ben Aflick's new movie "The Town". Love everything about Boston(ok except the celtics), and can't wait to see the movie!
Posted by keirahenninger at 5:37 PM